This is the story of the Basse family’s first — and only — winter.

“We survived Snowmageddon in 2010, but I’ll never be the same. Ever,” says Amanda Basse, who moved to Stonington, Connecticut, with her family mere months before the arrival of a major storm. Initially, Basse’s attitude was quite different. When early predictions of a nor’easter surfaced, the mother of three was thrilled for her Florida-born children. “We had just moved from St. Petersburg and my kids were excited to see snow,” recalls Basse.

Basse, who grew up in Rhode Island, had seen flakes fall before. But with Rhode Island’s proximity to the Atlantic Ocean, major snowfalls often turned into rain. So when the massive storm developed, she prepared the only way she knew how. “I bought the essentials: wine, cookies and two candles. Two!” recalls Basse. “Then the snow came. And it came. And it came.”

So much white stuff fell on February 5, 2010 — including “thundersnow” that produced snow bursts of two to three inches per hour — the storm earned the moniker Snowmageddon. The Basse family was snowed in without electricity, with little more than random non-perishables and whatever could be salvaged from the refrigerator.

“We lost power for two weeks,” says Basse. “My two little candles lasted a combined seven hours.” Luckily, the family had a fireplace to keep them warm. The other upside: “We got pretty good at board games,” Basse says.

But Snowmageddon changed everything for the family. “The experience scared us half to death and we decided winter is not for us,” says Basse. The following month, she accepted a job in Carmel, California, and moved the family west.

Using past experience to predict a future storm, as Basse did, is all too common, according to Jeff Schlegelmilch, deputy director of the National Center for Disaster Preparedness (NCDP) at Columbia University’s Earth Institute. “What you need to survive the next storm may not be the same as the last one,” says Schlegelmilch.

Are you ready? Review this nine-day blizzard preparedness guide to see if you’ve got what it takes to help survive in an extreme winter weather event. “A few hours of planning and preparing can spare you a lot of agony, and simple things can really be life-saving,” says Schlegelmilch.

Learn to decode key forecast terms to tell hype from threat. An “advisory,” according to the N O A A National Weather Service, implies the weather will be an inconvenience, but manageable with proper precautions. “When a Winter Storm Warning is issued, it’s serious,” says Sean Sublette, a meteorologist with Climate Matters, an independent climate research group. “A ‘warning’ implies a threat to life and property if no precautions are taken.”

Blizzards, by definition, are characterized by heavy or blowing snow, sustained winds in excess of 35 mph and visibility less than a quarter mile for at least three hours, according to the National Weather Service.

The Great Plains, Great Lakes region and Northeastern states are more prone to blizzard than other parts of the country, and areas in “Blizzard Alley” — stretching from the Dakotas and western Minnesota to Iowa, Nebraska, southeast Wyoming and eastern Colorado — are affected most, according to a study of U.S. blizzards from 1959 to 2000, according to the N O A A.

But blizzards don’t always stay within bounds. In 2015’s Winter Storm Jonas, 25 people from New York to Kentucky died. The lesson? If you live on the border of blizzard-prone areas, storm tracking is vital when forecasts predict winter storm warnings nearby, says Schlegelmilch. The National Weather Prediction Service Winter Weather Forecasts shows how vulnerable your area is to blizzards.

Living without electricity for days, or even weeks, can be fairly typical with winter storms due to driving winds and snow and ice piling up on power lines. Schlegelmilch shares these key points:

Day 4: Know the signs of and First Aid for extreme cold health emergencies

“Hypothermia and frostbite are big issues, especially if it’s very cold and windy after a blizzard,” says Schlegelmilch. Frostbite occurs when skin and body tissue freezes and turns pale or bright red and feels cold, hard or waxy, according to the Mayo Clinic, and signs of hypothermia — a dangerously low body temperature — can include:

If you can’t get to a hospital, focus on heating the victim’s core body temperature, according to the Mayo Clinic. If you’re stranded outside, shield the victim from wind, particularly the neck, head, and areas most affected by frostbite: fingers, toes, nose, ears, cheeks, and chin. Remove wet clothing immediately and replace with warm and/or dry clothing.

One frozen, burst pipe running at four to eight gallons a minute can do tens of thousands of dollars in damage, says Glenn Gallas, vice president of operations at Mr. Rooter professional plumbing service. “You’re looking at an extremely expensive home disaster.”

Locate the water shut-off valve in your home and label it. This valve is typically located in the basement. Practice turning the valve off clockwise by hand, which you will need to do in an emergency if your pipes burst. In rare cases, if your water valve is located outside the home, you may need to use a hex key at the meter box.

Day 6: Stock your car with supplies

In January 2016, hundreds of motorists were stranded on the Pennsylvania Turnpike for more than 16 hours. “Depending on the temperature of the pavement and the air during a snowstorm, a driver can get trapped in less than an hour,” says Sublette.

Beyond a typical kit with flares and a First Aid kit, Schlegelmilch says your winter car worst-case-scenario kit should include:

If you’re stranded and snow is accumulating quickly, remember to keep snow away from your tailpipe to prevent a carbon monoxide build-up.

Day 7: Shop for a week’s meals

The general rule of thumb in disaster preparation: have at least a three-day food supply for everyone in your household, including pets. For major snowstorms, Schlegelmilch recommends stocking up for a full week. “I remember one storm where the snow was higher than the standard plows,” says Schlegelmilch. “Some roads didn’t get cleared for a week.”

Your disaster grocery list should include non-perishable nutritious items that are easy to eat such as dried fruit; proteins like canned tuna, beans and nut butter; and shelf-stable (meaning powdered or boxed) milk.

Survey your house for zones vulnerable to heavy, wet snow accumulation, which can cause structures to collapse. Anything with a flat roof (think: carport or porch) is at particular risk and should be cleared first when snow begins to pile up. J.B. Sassano, president of Mr. Handyman home improvement service, cautions against shoveling from a ladder or the roof itself, where you can easily slip and fall. Instead, consider using a telescoping plastic-edged snow rake with your feet firmly planted on the ground and focus on removing excess weight (versus clearing every bit of snow) or hire a professional to assist.

Locate and label the outside vent to your heating system so you can clear away snow buildup, which can block the exhaust pipe lead to carbon monoxide poisoning.

Have a professional trim branches near power lines

Whether you live in a rural or urban environment, develop a plan with your neighbors to check in on each other. In a rural area, that might mean bringing the truly isolated members into town before a storm. In the city, identify elderly or medically fragile neighbors. “In any disaster, it really comes down to neighbor helping neighbor,” says Schlegelmilch. “At its most basic, they might have peanut butter and you may have jelly.”

There are seven signs of hypothermia to watch out for. Roadside Emergency Tips from a Highway Patrol Commander Who Has Seen It All ... At 70 Mph 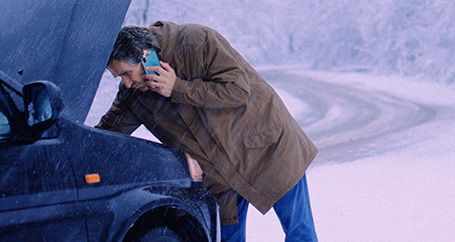 Winter Car Care Tips from One of the Snowiest, Coldest Places in the U.S.