For every driver who does it this way, there’s another who insists on doing it that way.

In otherwise tranquil households, fingers point and sparks fly over who’s wasting gas, risking a crash, or sending the car to an early grave. Here, experts weigh in on the feuds.

Picture it: two lanes of traffic, and one lane is ending ahead. Should traffic in the closing lane merge immediately, or wait and merge when the road ends?

For drivers at odds with the last-minute merge, it’s a matter of good manners.

“I think it’s presumptuous to wait until the last minute to merge,” says Liz Smith, whose husband is firmly on the pro zipper-merge side. “It puts the responsibility on someone else, who had the forethought to merge earlier, to let you in.” Smith describes her husband as a “numbers-oriented dude” who tracked down data to justify zipper merging, but she’s not buying it. “I’m more aware of what’s going on spatially, so I see the dangers.”

Minnesota is one of the states trying to educate drivers on the benefits of zipper merging. “It’s perfectly legal [in Minnesota] to use a lane right up until it ends,” says Ken Johnson, the state’s worksite traffic engineer. “We’ve found that zipper merging reduces the length of traffic backup by 40 percent when there’s a lane reduction ahead, and helps keep exit lanes accessible. In my opinion it can also be safer because both lanes are traveling at the same speed. In general, accidents are more likely to happen when there’s a speed differential.”

Johnson says that drivers concerned with road etiquette can rest easy. “When drivers use both lanes and take turns merging, traffic moves more smoothly. Everyone is going the same speed, there’s less braking and accelerating, and no one is cutting in line. These are the things that really frustrate drivers.”

The Oil Change Sticker: Follow It or Forget It?

Most service shops and dealers recommend bringing cars in for an oil change every three months or 3,000 miles, whichever comes first. They even put a reminder sticker on the windshield. Some drivers follow that reminder religiously; others think it’s a scam.

Always look closely at the car manufacturer’s recommendation in the owner’s manual.

“Every six months or 7,500 miles should be the new standard,” according to Bobby Likis, nationally syndicated car-talk radio host and 48-year veteran of the auto service industry. He credits today’s longer service intervals to the use of synthetic oil, which automakers have been using in car engines for more than a decade.

“Synthetic oil is about 80 percent refined crude oil,” Likis explains. The rest is a package of additives, like zinc, sulfur and detergents — chemicals that provide extra protection against wear and buildup on engine parts and also enhance and maintain the protective properties of the base oil. The result: better oil performance over a longer period of time compared to conventional oil, which is made entirely of crude.

Lauren Fix, an A S E-certified technician and national media automotive correspondent, agrees. “You’re good for up to 7,500 miles with a synthetic oil,” says Fix. (Some people know her as The Car Coach.) “I run it in all my cars, including ones built before anyone had even heard of synthetic oil, like my 1965 Mustang.”

Fix estimates that the transition to synthetic oil in new cars was complete by 2005. “If you have a car that predates synthetic oil, you can still request it at your next oil change. It might cost a little more, but you should get the same benefits as you would with a newer car.”

Blowing Out the Engine: Best Practice or Bad Idea?

Talk to diehard car types — the kind who frequently shine the tires on their regular ride — and they probably have an interesting idea about “blowing out” a car’s engine every once in a while. Holding the gas pedal to the floor for as long as legally possible, this theory goes, will clear out performance-robbing buildup.

“This advice is from a bygone era,” says Fix. “Decades ago, when cars had carbeurators instead of fuel injection and ran on leaded gas, carbon could accumuluate in the engine and cause performance problems. Running a car at full throttle for an extended period was said to blow the carbon out through the tailpipe, but there’s nothing to blow out anymore.”

Auto insurance quotes with personal service from a Farmers agent.

Cruise Control: Saves Gas or Not So Fast?

Some drivers punch cruise control because they think keeping a vehicle at a constant speed saves gas. “My wife thinks it’s a myth,” says Tim Ryder, a driver from Erie, Pennsylvania, who clicks on cruise whenever he’s on the open road. “I keep an eye on the gas when I drive, and I know she burns a lot more than I do when she’s at the wheel.” For his wife, Lynn, who averages 15 hours of driving a week for her job, staying in control of the accelerator outweighs any potential benefit of saving a little bit of gas. “I just think its safer. It’s easier to space out or multitask when you’re not in complete control, watching your speed and keeping an eye on the road.”

It’s true, cruise control keeps a car running at a constant speed. But the amount of gas saved may not impress drivers who believe in cruising for maximum fuel savings.

“Every time you touch the accelator, you throw gas into the engine,” says Lakis. “Many drivers don’t realize how often their foot goes on and off the gas when trying to maintain their speed. They fall into a pattern of speeding up and slowing down. Cruise control eliminates unncessary changes in speed, which enhances efficiency.” (He notes that cruise control should never be used in wet or wintry conditions due to potential loss of traction.)

“You can squeeze an extra half-mile from a gallon of gas by using cruise control instead of your right foot,” Fix estimates.

However, Lakis and Fix are both quick to point out that any boost in mileage is limited to flat stretches of road. They say cruise control can actually decrease efficiency when driving on hills.

“Cruise control can’t see what’s ahead,” says Lakis. “It doesn’t react to hills until the force of gravity has already slowed the car. To make up for lost speed, the system opens the throttle and forces the engine to downshift. Cruise control responds late and then overcompensates on hills, which definitely wastes gas.”

Starting up With Everything On: A Battery Drain or No Big Deal?

Mel Gilden methodically turns off accessories before shutting down the engine — radio, climate control, wipers and whatever else he might have used on a drive. He is particularly concerned with the air-conditioning, which he routinely turns off about a block from his home. Even on the hottest days of the year, which are frequent in the California desert town he lives in.

“The owner’s manual for the first car I ever had recommended turning off the AC before shutting off the engine,” he says. His rationale: starting a car with the AC already on can be a drain on the battery. Plenty of drivers agree with the idea that more voltage is required from the electrical system if you’re trying to start the car and everything else at the same time. Gilden’s fiancée, however, thinks it’s perfectly fine to leave everything on (especially the air-conditioning on a hot day).

“The fiancée wins on this one,” says Lakis. “No matter how many bells and whistles you have running, they’ll all shut down when you turn the key or press the button to start the car. This feature is built into the starting system of every car. Once the engine starts, everything comes back on.”

For drivers who disagree, a demonstration may be required. “Point out how the blower stops, the radio cuts out or the touschreen goes dark for a few seconds when you start the engine,” says Lakis.

“The only thing I do before turning off my car is park the wipers,” says Fix. “Leaving them resting on the windshield might wear out the blades more quickly, and it doesn’t look very nice.”

Left-Foot Braking: A Strain on the System or Smart Move?

For all but the rare manual transmission driver, left-foot braking might seem like something best left on professional race tracks — a technique that doesn’t translate to driving highways or surface streets.

What the pros say: “The last scholarly research on unipedal versus bipedal driving was from the 1930s,” says Dan Richard, Ph.D., co-author of a 2016 study published in the journal Ergonomics

that tackled the question: Is it better to drive with one foot or two?

Data recordings showed that bipedal driving resulted in shorter stopping times and distances in emergency braking situations. “With bipedal driving, you eliminate the time it takes to move your foot from the accelator to the brake,” says Wang. “This absence of interpedal time translates into faster, shorter stops.

“Even so, only two of the 30 subjects reported driving with two feet on a regular basis.”

The researchers acknowledge the potential drawback of bipedal driving: riding the brake pedal and putting excessive strain on the braking system.

For now, Wang offers the same advice she gives to her own family. “I’m teaching my 16-year-old son to drive, and he recently asked me if it’s okay to use both feet. I had to pause and think about it and then told him to do what feels comfortable to him.” 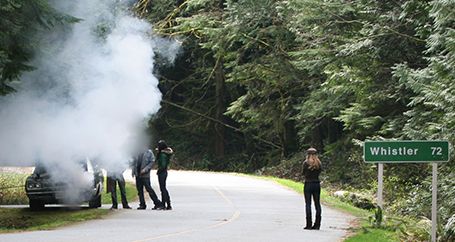 What to Do If Your Car Engine Overheats 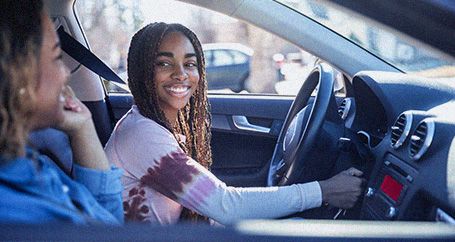