On the night of February 12, 2010, a freak snowstorm dumped more than a foot of snow on Forth Worth, Texas.

The record-breaking storm caused $25 million in property damage, including the massive roof collapse that shut down Rahr & Sons. Co-owner Erin Rahr tells the story of the storm that destroyed their building (but strengthened their business).

It was an absolutely beautiful sight: heavy snow fell all day long, covering the ground, the cars and the trees. Here in Fort Worth, everybody was pretty excited about it. That night, they announced road and school closures for the next day, and my two young boys were thrilled about having a snow day. It never crossed our minds how much damage a snowstorm could cause.

My husband Fritz and I own Rahr & Sons, a local brewery. We founded it in 2004, but my husband's family has been in the business since before the Civil War. The evening of the blizzard, while I was home with the kids, Fritz was at work late with a bunch of the employees. Then they heard the snowfall was going to be more than anybody expected, and there were local warnings telling people to be prepared for an emergency. We had a visiting brewer who was planning to work through the night, but his wife was expecting, so we sent him home immediately. Fritz came home, too.

Even before we went to bed, we started hearing unfamiliar noises. It wasn't the sound of heavy wind or something you'd expect from a storm. The snowfall was very quiet. But at around nine or 10 p.m., we both noticed a series of strange sounds, like fireworks or cars backfiring. Some of it sounded far away, and some came from right outside our windows. We had no idea what was happening, so we walked outside to check it out. I have to admit: it was terrifying. We live in an old neighborhood with tons of huge old live oak trees, and dozens of limbs were snapping and crashing to the ground. Each limb made a loud cracking sound as it broke under the weight of the snow. We heard cracking tree limbs all night, snapping and breaking. My biggest fear at that point was having a limb fall on our house. Like I said, we had no idea.

Before dawn, we got a call from the security company that monitors our business. They told us we had a fire sprinkler going off in our building. We'd had false alarms and motion sensors go off frequently before, so it didn't worry us immediately. Then the woman on the phone mentioned the fire department was already at the building, and they wanted to know what color car we were driving and approximately how long it would take us to get there, because access was limited in the emergency conditions. That's when we knew it wasn't a false alarm.

My husband headed there first. The roads were iced over and there were trees down all over the city. I'm a Fort Worth native, but he's originally from Minnesota, so he knew how to drive in those conditions. The announcers on the radio were talking about all of the flat roofs that had collapsed overnight. The snow has nowhere to go on a flat roof, so it collects instead of sliding off, like on a pitched roof. Our building had a flat roof.

When Fritz arrived at the huge converted warehouse housing our operation, the Fort Worth Fire Department was in the back of the lot with engines, ladders, floodlights and equipment. He parked in front and, in the blizzard and confusion, all he could make out was the white glow of the emergency strobe lights bouncing off the mountain of snow. Then he heard the roaring sound of rushing water. Our roof had collapsed, completely busted open to the sky. When the roof came down, it took down the entire fire suppression system with it. The entire floor was flooded.

I remember getting to the building and not believing my eyes; it looked mangled beyond repair. I cried and cried that morning, not just for my family, but for the wonderful people who worked for us. They’re young and have families to support, too.

Fortunately, we were able to tell our employees they still had a job that day because of our Business Interruption Insurance coverage. Also, there was salvageable product. Our distributors picked up everything we had already packaged to sell.

The rebuild of Rahr & Sons took about seven months before we were back up and running. In the meantime, our insurance paid our staff, got the rebuild rolling, and allowed us time to heal, regroup and reorganize. It’s amazing to think about it now. How many small business owners get the opportunity to step back, six years after you started a business, and take a hard look at everything you do? When you’re a small but fast-growing business like we were at the time, your resources are limited and there’s never ever enough time in the day to get everything accomplished. We had the time to really look at everything — from production and accounting to staffing and branding. We were able to make improvements that helped increase production efficiency and volume. We also did a total rebrand while we were down, and we were able to hire more people.

During the rebuild, not having to worry about an income, and having that time to step back and reflect on every process, to tweak recipes, that’s been invaluable and enabled us to grow bigger and come back stronger than before. When we re-opened, we threw a heck of a party, and we created a new brew called Snowmageddon in honor of what we call “the worst best thing to ever happen to us." 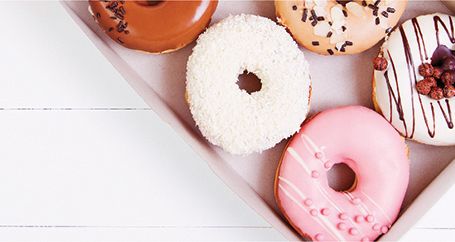