After smoke, fire and water damage destroyed her family's home, this woman started thinking beyond the basics of fire prevention.
PLAN AND PREP 8 Minute Read

After smoke, fire and water damage destroyed her family's home, this woman started thinking beyond the basics of fire prevention.
PLAN AND PREP 8 Minute Read

After smoke, fire and water damage destroyed her family's home, this woman started thinking beyond the basics of fire prevention.

It was around 2 p.m. last February when Stacey Reine* got a phone call at work from a neighbor who'd heard an explosion next door. Reine and her husband both raced home from work to find their street blocked off by police cruisers and fire engines. The garage connected to their home was engulfed in smoke and flames.

Fortunately, no one had been home at the time of the explosion. "The nanny was 10 minutes late. If she had been on time, she would have pulled into our driveway just as the garage door flew off into the street," says Reine. She watched as firefighters doused the flames and remembers feeling hopeful that the fire had been contained in the garage.

The sight of the family's pets delivered another wave of hope. "My dog was in a police car and Cookie, my cat, was swaddled in firefighter jacket getting oxygen," she says.

After the fire, as Reine walked through the front door of her home, her feeling of hope began to fade. Water covered every surface. Insulation hung from what was left of the ceiling. "When I walked into my bathroom, I remember wondering why my glass shower door had turned gray," she says. "I opened the door and was engulfed in smoke that had been trapped in the shower."

Smoke damage and water had destroyed nearly the whole house. Reine later learned from a firefighter why the damage was so widespread: firefighters often make the tough call to hose down an entire structure and pull down the ceiling to ensure there are no smoldering embers that could reignite later. "Once your walls get wet, and the floor gets wet, everything needs to be ripped out," Reine says.

The immediate questions on her mind: Can we afford to rebuild our home after sinking our life savings into it? Will this fire financially ruin us?

"I recognized within the first few days that I wasn't only going to lose money—I was going to lose time. Time spent with my children, and time spent on my career," she says. "You can't raise your hand to volunteer on a project or participate in a school activity when you're essentially homeless."

While the Reine family had followed the basics of fire safety and prevention—testing alarms, preparing an escape plan—the reality of a home fire left them wondering what they could have done differently.

Fire Safety Starts With a Chunk of Plastic and $5 Batteries

One year after the fire, Reine's family finally moved back into their home. "Immediately, my oldest son walked around the house and counted all of the smoke detectors."

Three of every five home fire deaths resulted from fires in homes with no smoke alarms (38 percent) or no working smoke alarms (21 percent), according to a 2015 study by the National Fire Protection Association (NFPA)

. The same report also noted dead batteries were the culprit behind 24 percent of the smoke alarm failures. Here is a rundown of smoke alarm to-dos from Kevin Kelley, Sr. Director of Community Preparedness Programs at the Red Cross:

The N F P A recommends using different styles of smoke alarms in a home:

After her fire, Reine purchased a "smart" smoke and carbon monoxide alarm, which is designed to differentiate between burnt toast and a raging house fire. Smart alarms are typically linked to a home automation system that gives users the ability to manage it from a smartphone, which Reine believes could save precious time calling in the alarm. "The quicker you get the firefighters in your house, the less smoke damage will occur," she says.

Another key feature to consider: "interconnected" smoke alarms hardwired or wirelessly connected by radio signal so that when one sounds, they all sound.

The typical estimated life of a lithium ion battery is 2 to 3 years, or 300 to 500 charge. -
Tektronix, electronic testing and measurement equipment manufacturer

How (and Where) to Install a Smoke Alarm


The National Fire Alarm and Signaling Code (N F P A 72) safety standards published by the N F P A provides specific instructions for placement and installation of smoke detectors and alarms.

Measure the space between the ceiling and the outer edge of any wall-mounted alarms in your home. Is the alarm installed according to the manufacturer instructions?


It's the most fundamental fire safety advice: develop a fire escape plan and practice it regularly. Yet less than 10 percent of families in a recent Red Cross survey had practiced a fire drill.

Can members of your household safely escape in two minutes (which is the amount of time it can take a fire to turn life-threatening, according to Ready.gov)? If not, here are some steps to get your fire escape plan in shape from the National Fire Protection Agency

* Homeowner's name has been changed.

December and January, Saturdays and Sundays, and between the hours of 6 p.m. and 7 p.m. -
American Red Cross 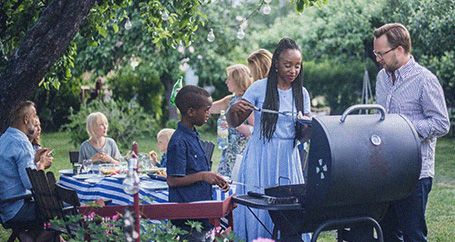